Coombe Bissett and Homington Drama Club was formed in 1973 just after the Coombe Bissett and Homington Village Hall was first built in 1972. The club generally puts on a pantomime in the village hall during the first week of December and a play in May. The club has no formal membership in that there are no fees.  Members mostly live in the Chalke Valley and Salisbury area.
For more information about the club please contact Lynn Mills, Chairman, on 01722 718 438  or  Chris  Chelu, committee member, on 01722 718 351  or click here to e-mail the Chairman.
Owing to the Coronavirus pandemic it has been decided to cancel the pantomime for December 2020. Hopefully we will be able to recommence productions next year, starting with a play in May 2021. Don't go away! Watch this space!

Villagers hoping to act in a major or minor role are most welcome, including any newcomers of any age who, as yet, haven’t smelt the greasepaint or heard the roar of the crowd. We are always looking for new faces to help us with plays and pantomimes, and we have it on good authority that there are people lurking in the village who have hidden talent if only they can be persuaded to come along to auditions. Rehearsals are as much fun as the performances, and it is a good way to make new friends. If the stage itself is a fearsome thing for you, we welcome those of you who would like to help back stage, side stage, above stage and under the stage, if not on stage. Jobs that need doing include making props, good for those model makers amongst you; organizing costumes from our comprehensive costume store; scene painters for those artists amongst you; front of house, for those who like dealing with the punters; and sales and marketing types to do publicity and sell tickets. If you live in the Chalke Valley, the Salisbury area or further away and would like to join us  contact Lynn Mills on 01722  718 438
or Chris Chelu on 01722 718 351   or click here to e-mail the Chairman.
Panto 2019    Goldilocks and the Three Bears
Thank you to all our supporters.  We have been able to give £700 from our profits shared between the Wiltshire Air Ambulance and Wilton: Riding for  the Disabled.
Spring Play 2018:       Babysitting Calvin & Mirage
£300 has been given to the Salisbury branch of the Alzheimer's Society and
£100 to Alabare from the profits. Thanks to all who supported the evening.
Panto 2017         Red Riding Hood
Thanks go to all who supported this production.  We have been able to give £500 to the  Salisbury District Hospital  Stars Appeal towards the purchase of a second MRI scanner, and £500 to the John McNeill Opportunity Centre.
Spring Play 2017     " Menu for Change "
"Menu for Change", (click for details) the third play by our resident playwright, Chris Chelu, was performed on 19th & 20th May 2017,  in Coombe Bissett Village Hall together with a two course dinner.  Continued support from our audiences will enable us to give a £500 each to Prostate Cancer UK , and STEPPS, a charity which supports children with lower limb conditions.
Panto 2016          " Panto at the OK Corral"
Many thanks to all those who supported this pantomime. From our proceeds we have been able to give £1000 to   Wiltshire Air Ambulance.

The Drama Club has given £1000 to Wiltshire Wildlife Trust to help purchase 85 acres of additional land  which will double the size of Coombe Bissett Down Nature Reserve.  This money comes from the profits that we make producing pantomimes and plays. So thank you once again to all of you who support us.

Panto 2015   Treasure Island
Thanks to the support of our audience both in Coombe Bissett and beyond, the Drama Club has been able to give £1000 to Salisbury Hospice and £200 PAT Dogs. 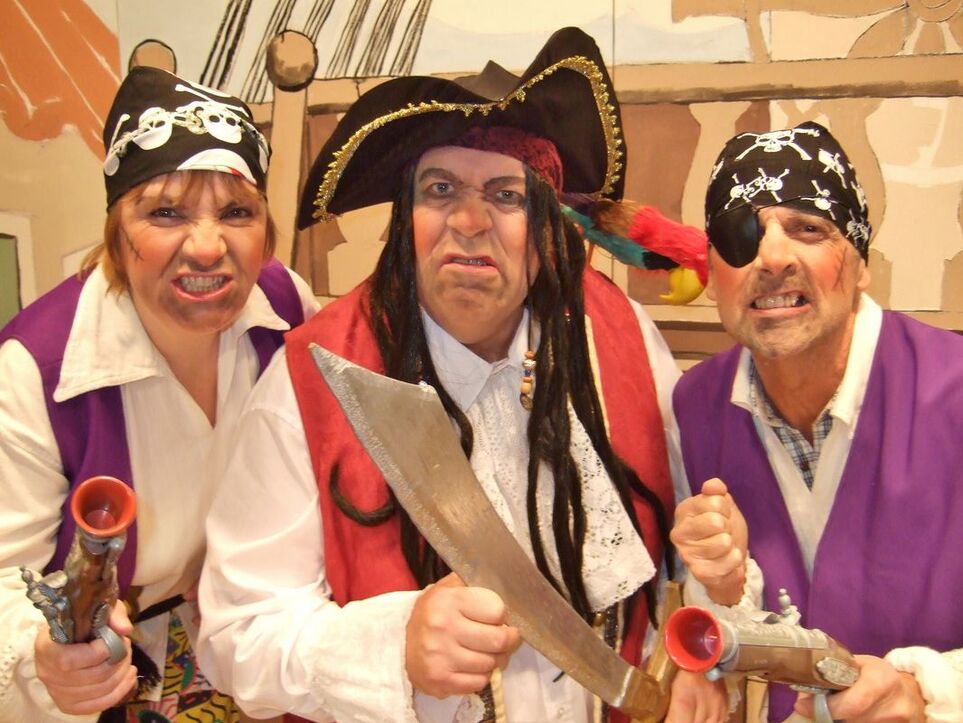 Many thanks to all who came to this play with buffet and had an enjoyable evening. We have made a donation of £500 from the profits to Alzheimers Research UK. We also have used some of the monies to build some new lightweight flats to replace those which have become rather heavy due to repeated applications of scenery paint.

Many thanks to all those who supported us this year. The club has made a substantial donation of £1000 to Salisbury District Hospital STARS APPEAL for the dedicated Breast Cancer Unit.
Spring play    2014     "Sandcastles" (click for details)
The world premiere of this play, written by Chris Chelu was performed in the Village Hall on  Friday 2nd May & Saturday 3rd May 2014 with a 2 course dinner. Thank you to all those who came and helped to make the two evenings a great success. The club has been able to give £500 to Prostate Cancer UK from the profits. Many thanks for your support.

Thank you to all who supported us.  We have been able to donate £1000 to the Salisbury District Hospital Scanner Appeal from the profits. This is in memory of John Mills who was our musical director for nearly 30 years and who recently died after a long illness.  He worked for Radio Odstock at the hospital for some time whilst battling with cancer. He very much enjoyed meeting patients there and we are sure that this helped him cope in his last few years with us.

On 15th June 2013 a gathering of drama club members took place in the village hall to celebrate the 40th year of the club.   About 90 past members from the 1970s to the present day gathered to enjoy a hog roast and to dance to Legacy Sound, with music from the 50s, 60, and 70s.  Actors and directors aside, productions could not take place without the large number of other people willing to give up their time and who help to make each show a success.  Thank you all.         Click on the picture below for a larger one. 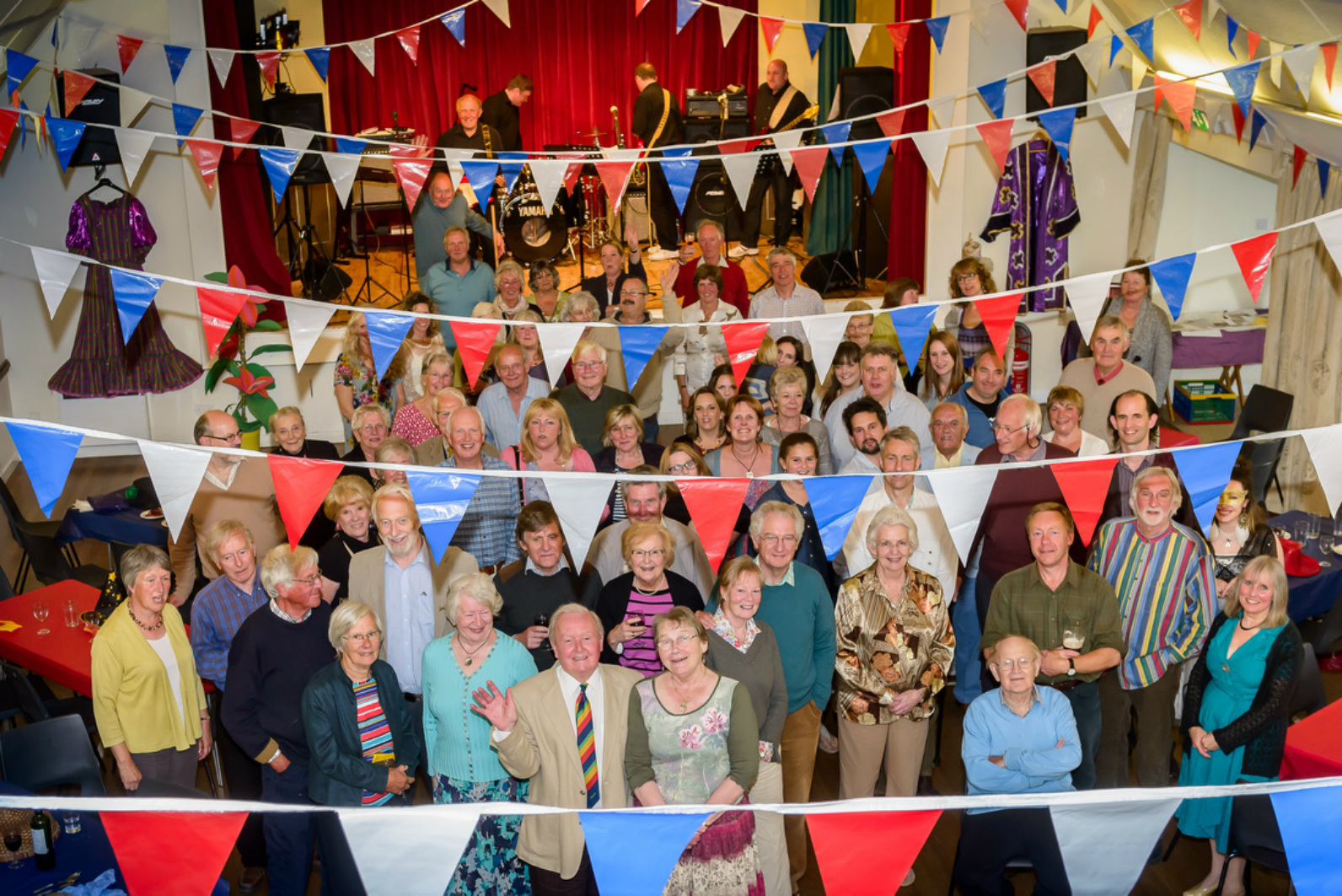 It has been the policy of the Drama Club for many years to give monies from our profits to charity. We generally support local and national charities chosen by the committee, and some money is given to the village community to improve local facilities. This money has come from our audiences and we thank them for supporting us over the years, enabling us to make these donations.  Over the last 14 years we have given  £23,950 to the charities below.
Link to Drama groups in Wiltshire:       www.dramagroups.com